The Classical Safari Hunt of a Lifetime

Trek’s partnership with Game and Bird Hunters Africa goes back to 1992. This is one of the few areas remaining in Africa where you can still do a classical safari. Join us for the experience of a lifetime!

Trek’s Mozambique outfitter, Mark Haldane of Zambezi Delta Safaris, was one of the pioneers in the Zambezi Delta area to control poaching and increase practical hunting practices in Mozambique. Today, Mark controls Coutada 11 and 12, totaling nearly 4 million acres with herds of Cape Buffalo estimated in the 20,000s, and Mark is one of the go to authorities on Cape Buffalo. Between Coutada 11 and 12, you will find four camps: from a traditional tented camp to comfortable open air bungalows. While you are stalking your large Dagga Boy, you can also choose to hunt over twenty plains game species, from Sable to Waterbuck and Duiker to Warthog. Although Mozambique has been scarred by violence over the last 75 years, big game hunting in Mozambique has helped the people of the country, and it has certainly become a favorite among hunters worldwide.

Our standard package is a 10 day buffalo package. The package includes 11 nights in camp and 9 full days of hunting, as well as a buffalo license and trophy fee. The spectrum of wildlife in this area is quite remarkable, as it houses 20 huntable species from the tiny Livingstone Suni to the elephant.  Buffalo roam the open floodplains and swamps in herds of several hundred, and Sable in huge herds nearing 100. The concession has 3 distinctive types of habitat, namely sand forests, tropical savannah, and swamps.

Mozambique big game hunting is conducted in one of Africa’s prime game areas, so it just doesn’t get any better than this. Little has changed over the past 50 years here.  The following animals can also be added on to this package, quota permitting, for license and trophy fees: Sable, Lichtenstein’s Hartebeest, Waterbuck, Eland, Hippo, Nyala, Bushbuck, Reedbuck, Baboon, Warthog, Bushpig, Oribi, Suni, Red Duiker, Blue Duiker and Crocodile.

We have 4 camps within these 2 areas, ranging from traditional East African tent with bath en suite to our Magazi Lodge.  Although you will be hunting unspoiled, unfenced Africa, you will be accommodated in style, with great home style cooking. 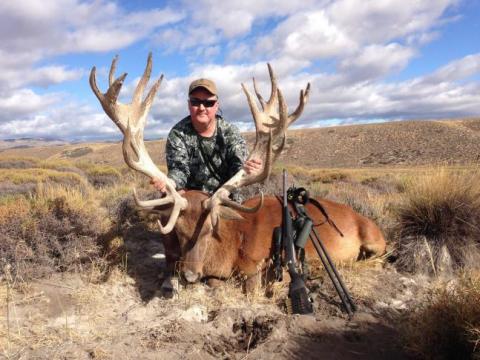 In early March Davis Barron, and his father Rodney took a trip to Argentina for trophy “free range” stag at the Algar Safari Ranch. Davis and Rodney downed beautiful Stags measuring 284 ⅜ and  362 6/8 respectivly. Rodney’s was the second largest ever...