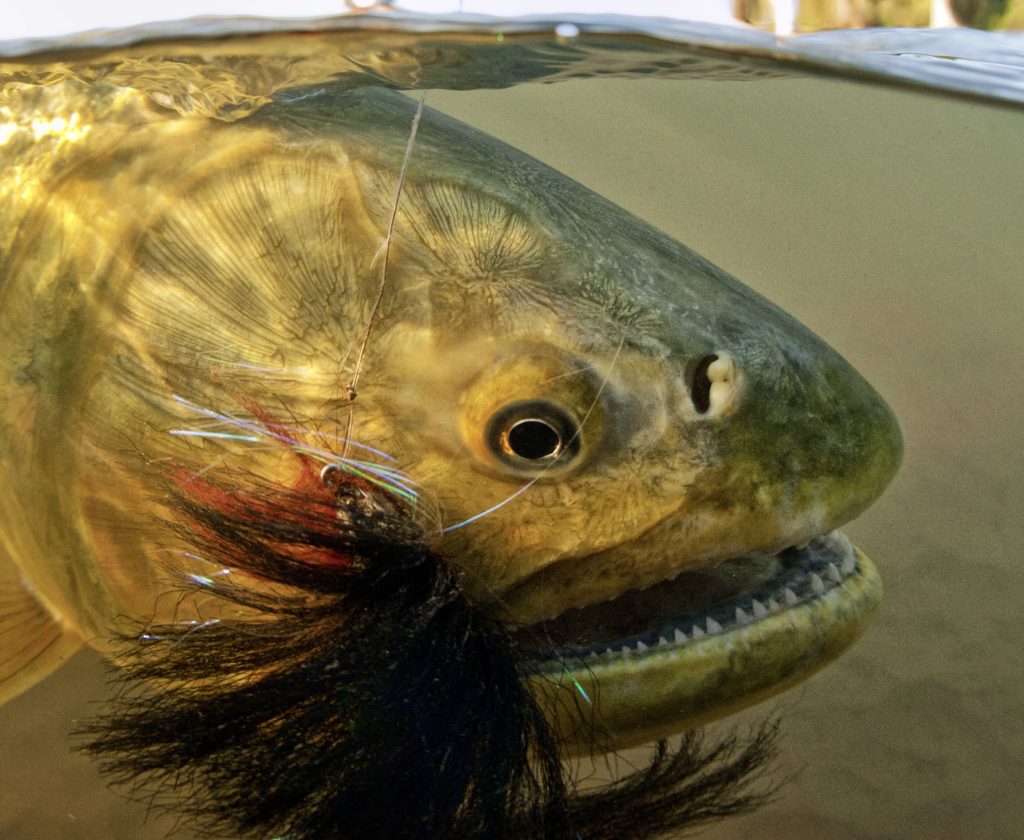 For anglers, Patagonia’s trout are unquestionably the fish species most closely associated with destination travel to Argentina. But if you prefer your sportfish with a more savage disposition capable of producing drag-melting runs and tarponian acrobatics, Argentina’s Paraná River is, quite literally, a gold mine.

Golden dorado appear to have an inferiority complex about their second-class status to Argentinian trout— one which manifests in highly aggressive behavior toward a full array of angling presentations. For this reason and many more, every adventurous fishing fanatic should make at least one trek to Argentina to target dorado.

Pound-for-pound, golden dorado are the most explosive fish you’ll encounter at the end of a fishing line. There is some irony in the pound-for-pound reference, in that mature dorado represent the largest freshwater sport fish in the Río de la Plata basin, which comprises six rivers in three countries. Yet even juvenile dorado possess steel jaws with teeth like a raptor and will test the limits of an angler’s equipment. 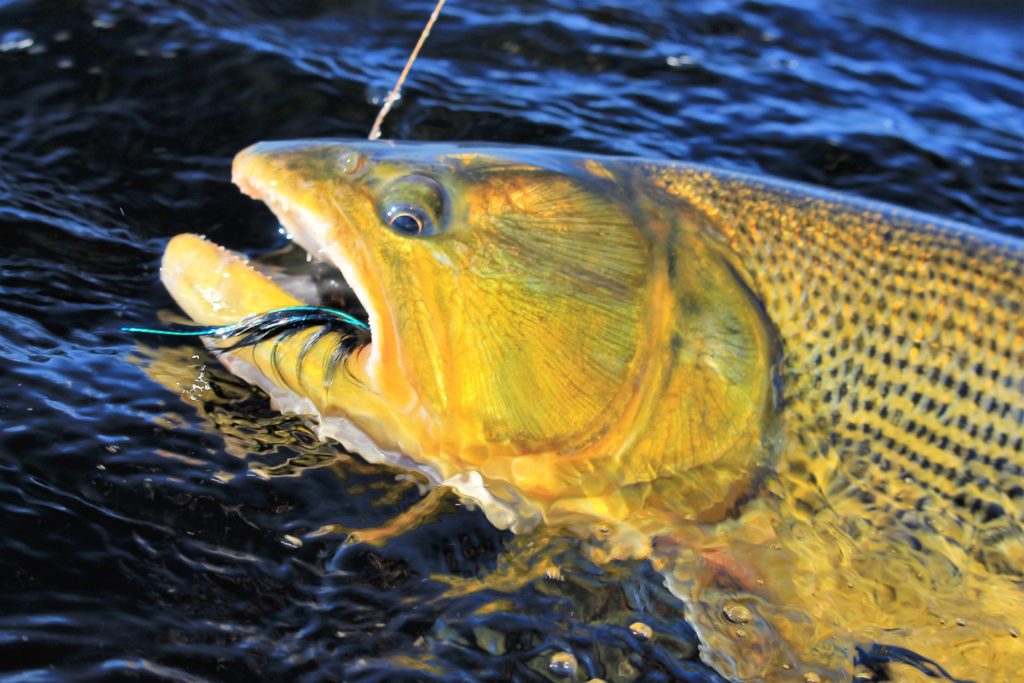 We recently journeyed to Argentina in pursuit of Upper Paranà River dorado by way of the Paraná Gypsy, a 70-foot tri-level catamaran mothership. Some of the most exciting fishing and adventure trips Trek International Safaris has ever offered have been on motherships, where the operation is mobile and scenic. The mothership configuration allows the boats, guides, and most importantly the anglers, to be in the most productive fishing areas at any given time.

Upon arrival in Buenos Aires, our group meets up at a local churrascaria to get acquainted prior to our rendezvous with the Gypsy. Our server quips that we will have beef only four times a day, and we will soon learn he is only half joking.

Argentina is fiercely devoted to the art of beef, both in its production and consumption. This is a fact that truly sets in when you see an Argentinian unsheathe a custom steak knife while a perfectly functional restaurant knife sits on the table.

Argentinians consume more than a hundred pounds of beef in a given year, more than twice that of Americans. The country’s fertile lowlands (Las Pampas) provide an optimal environment for ranching grass-fed beef, and the country takes great pride in and advantage of this resource. 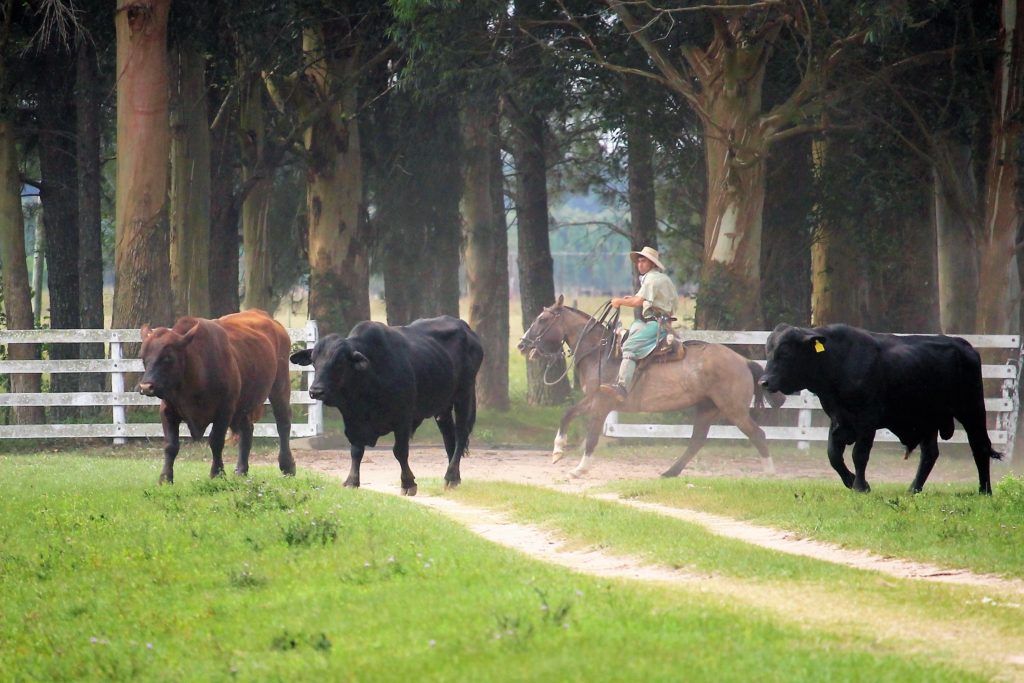 The gauchos, Argentina’s cowboys, have for centuries symbolized the country’s romance with cattle production. Gauchos have a bit more flair than American cowboys. They sometimes wear scarves and berets, somehow managing to pull off this look without the pretense of appearing as if they’re trying to be French.

Originating some 4,000 miles north of Patagonia, the upper Paranà is an enormous area representing the second largest river delta in South America, surpassed only by that of the Amazon. Exploring the Paranà by flats boat offers a breathtaking portal into a complex system of lush marshlands, lagoons, tributaries, creeks, and islands.

The marsh is teeming with unique wildlife, such as the ostrich-like rhea, caiman and an immense population of capybara (also known as the world’s largest living rodent). Arguably adorable, but undeniably fascinating to observe in the wild, Capybara are the lounge chairs of the marsh, as a variety of smaller creatures were observed resting on them during our visit. 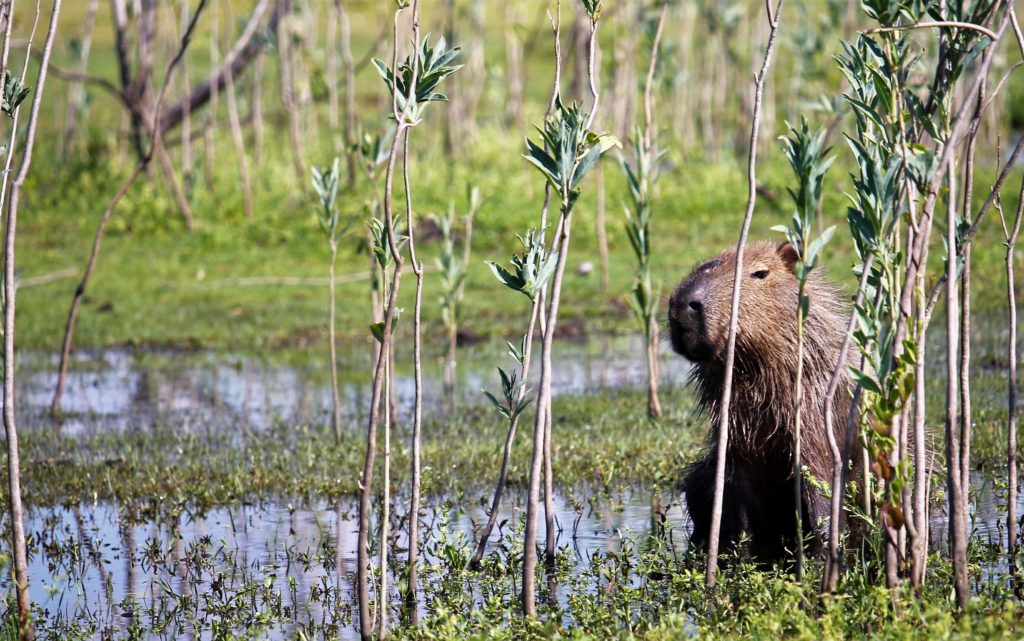 Being also where the Paranà and Uruguay rivers begin to converge, this ecosystem enjoys the region’s largest migrations of bait fish of sabalo, pejerrey and sardines, which are the main food source of the golden dorado, as well as other predatory fish such as the payara-like chafalote, palo meta, surubi (big catfish), pira pita, wolf fish, pacu and other excellent game fish, that challenge both fly and spin anglers alike.

Fishing days aboard the Gypsy are wonderfully structured. Morning and afternoon angling sessions are set apart by a hearty lunch consisting of wine, steak (naturally), and starches, followed by a restful siesta, through which guides and anglers alike are able to recharge.

At camp, I meet up with my fishing guide Tito Saenz, a fascinating young man who sips brewed Yerba maté through a metal straw. In addition to being a fine fishing guide, Tito is a renowned artist in Argentina.

Having never fished for dorado, I ask Tito what to expect over the next few days on the Paranà.

He begins to tell a story of an Argentinian legend involving a kind-hearted, lawbreaking gaucho named Antonio Gil. Upon being captured by law enforcement and sentenced to death by hanging, Gil promised his executors he would convey their prayers to God upon passing through to the other side. After telling Gil of his sick
child, one of the executioners arrived home to find the boy well, and thus was born a legend.

I ask Tito what this legend what has to do with catching golden dorado.

“When it comes to landing a trophy dorado,” replies Tito, “it will help to implore Gauchito Gil.

“As with tarpon, many big dorado are hooked, but you need both skill and luck to land the fish of your dreams.”

Over the next few days of fishing, this discussion would recur in my mind many times. While we land many nice dorado of three to five pounds over the first few days and evenings, the two chances we have at big dorado result in a spit hook and a broken leader. 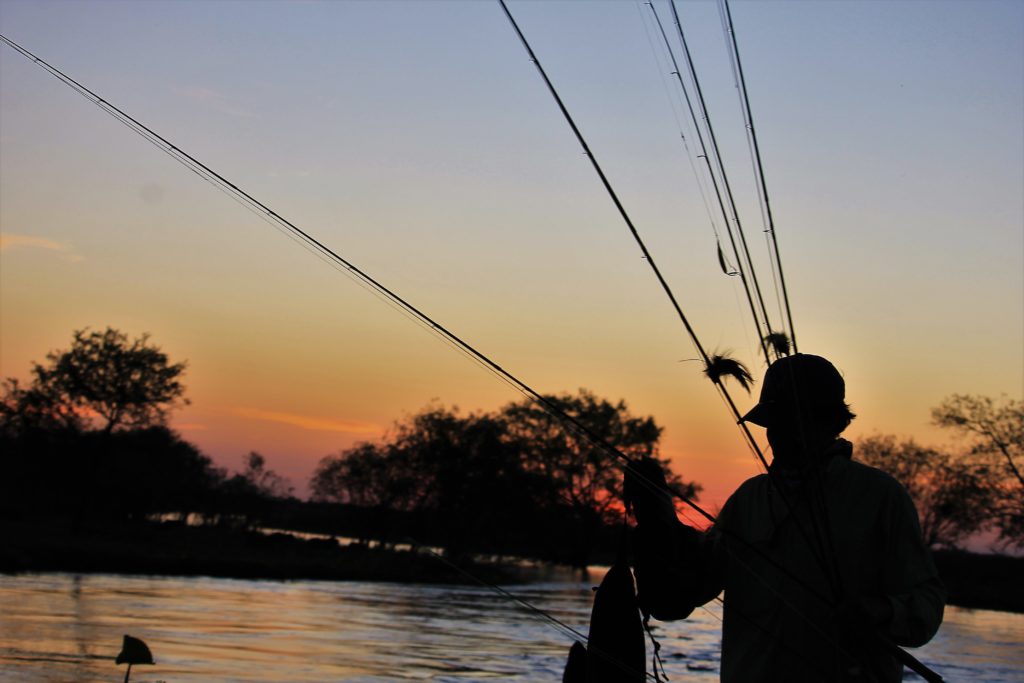 As we push out for the final few hours of fishing on the trip’s last day, hope for a trophy dorado is fading fast. Casts become rushed and sloppy, and frustration is setting in. I am somewhere between the denial and acceptance stages of grief.

Sensing the need for a miracle, Tito says, “You should have a talk with the Gauchito.”

While fish prayers are a time-honored tradition in my family, praying to an outlaw cowboy from a foreign country feels like adding an unnecessary party to my spiritual relationship. Also, I generally avoid praying for fish to bite because I remember what happened to Fredo in “The Godfather”.

As we continue to drift downstream, making many unproductive casts to promising waters, the clock is winding down fast. Tito eases the boat onto a weed bed near the shore.

I decide to make one more cast up current, allowing the fly to swing out and sink into the deepest part of the eddy.

In real time, it is impossible to discern what happens first when a truly big fish hammers your fly—whether it is the take itself, or the intense rush of adrenaline that assumes control of your body. Either way, when a mature bull dorado erupts from the water, making an impossible number of head-to-tail shakes in a single jump, you are abruptly reminded that fish prayers may be necessary.

Within seconds, the fish that brought me 6,000 miles from Florida to Argentina has torn through all the reel’s fly line and much of its backing. More than ten minutes and several majestic leaps later, most of the line has been regained. As the leader nears the edge of the skiff, my heart is surging to hold the fish.

Suddenly, and with the feel and sound of an oak branch snapping apart in my hands, I am holding but half a rod. As fast as the heart and spirits drop, the boat may as well be a floating casket.

In this haze of panic, I see Tito reach down into the river. With his next words, hope once again springs forth.

His hand re-emerges, grasping the stripe-bisected tail of a line thieving, rod breaking, 24-carat lode of scaled gold. With a glorious heave, the beast is boated, and Tito hands the fish over to me, beaming with pride.

We are exceedingly mindful of how precious this resource is for the country, so we say our goodbyes quickly. As the beautiful creature disappears back into the depths with one final golden flash, we sit down and enjoy a moment of quiet reflection.

Tito looks up into the sky and smiles, before turning to me to break the silence.

“I must confess something,” he says. “I implored Gauchito Gil on your behalf.”

He is looking at me, solemn as a judge, before cracking a smile. Suddenly, we are joined together in laughter.

It makes no sense, right? Praying for a fish you will release within moments of catching. To speak about fishing in terms that would put relationships with our wives in a tenuous state. It’s an angler thing, and if you love it the way we do, you just understand. 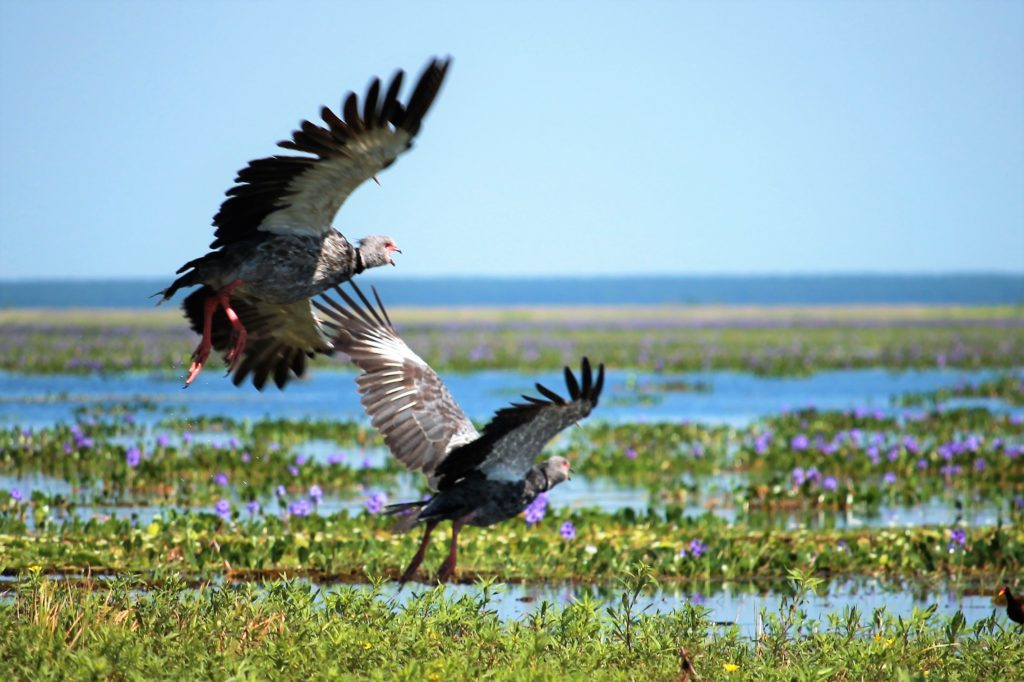