Argentina’s Lake Strobel is among the most truly magnificent angling destinations on earth— not just for its insanely large resident rainbow trout, but also for a surreal natural environment you’re unlikely to experience anywhere else. You’re not quite to the end of the earth here— the tip of Antarctica is still some 800 miles to the south— yet the journey into the place feels otherworldly.

The south Patagonia landscape was forged ages ago by basaltic lavas creating the signature volcanic craters that dot the countryside. Glacial runoff infilled many of the craters, forming lakes that yield vibrant watercolors ranging from aquamarine to milky white.

Strobel’s water displays more clarity than the glacially filled lakes, and it is the only lake in the region that hosts trout that grow to more than 30 pounds in size. The origin story of the lake’s massive rainbow trout population is so miraculous, you may have to go see for yourself to believe it.

Ironically, Strobel was devoid of gamefish until a little more than 30 years ago. In 1989, a local farmer imported fingerling rainbows from a hatchery on the Santa Cruz River and released them into the Barrancoso River, which flows into Strobel. 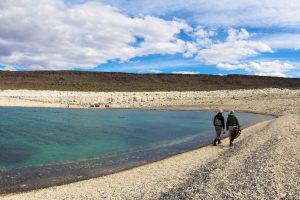 With modest expectations to create a small sportfishing opportunity for a handful of locals, there’s no chance the man could have envisioned what would become a fishery of legendary proportions. It would take time and an impossibly improbable chain of fortuitous circumstances.

Unbeknownst to the farmer, the Barrancoso yields an insufficient food source for trout. The quest for survival led the rainbows to migrate into Strobel, where they found a bonanza.

The lake is swarming with scuds, tiny arthropod crustaceans that consistently produce clouds of food for hungry trout— an incubator for growing mutant rainbows. Gorging on the protein-rich scuds and with no predators or competition from other fish, Strobel Lake’s rainbows grew to impossibly large sizes while nobody was watching. 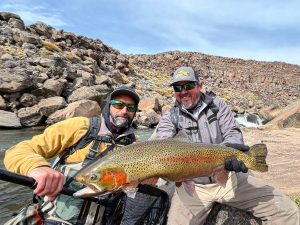 Consider yourself warned— the fish are so big and plentiful at Strobel, if you go, it may ruin trout fishing for you forever. When you go, there is no better place to fish and stay than Estancia Laguna Verde (ELV).

The father/son team of Roberto and Luciano Alba purchased the land for ELV more than a decade ago from the same man who introduced rainbows to the Barrancoso. The Albas have poured a lifetime of angling passion into creating an experience that is as genuinely special as the fishing. 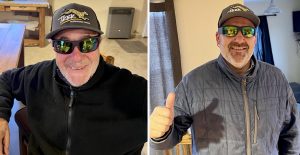 Members of the Trek International Safaris team joined a group of anglers from all over the U.S. for ELV’s opening week this October, and both the fishing and hospitality lived up to the hype.

Descending into the Strobel basin through piles of white rock for the first time feels about as close to a lunar expedition as you’re likely to experience on earth. The contrast of the lake’s expanse of vivid blue water against pale rock formations is stunning, and the angling experience of your life lies just beyond the shoreline.

ELV provides exclusive access to nearly nine linear miles of Strobel, including several bays that offer protection from Patagonia’s notorious winds. A team of highly skilled and hospitable guides cater to anglers of all skill levels, ensuring everyone has shots at big fish, and lots of them. 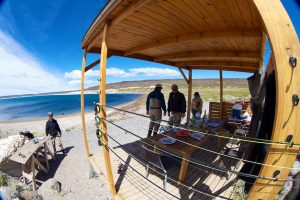 Each member of our group landed trout more than 10 pounds, with many in the 15-pound range and a few approaching 20. These fish display an array of striking colors, with “chromers” providing a particular fierce, drag-screaming fight.

The Strobel ‘bows respond to a variety of presentations, including large dry flies such as mouses and Chernobyl ants, as well as streamers and nymphs. With excellent water clarity, sight casting is the standard on Strobel, providing the incomparable thrill of anticipating the take. 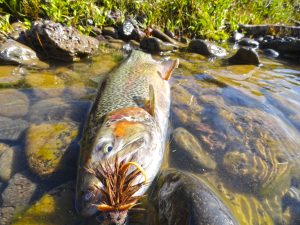 For more adventurous anglers, ELV’s river program provides a test of both fitness and technical casting in rugged conditions. Walking and stalking along the boulder-lined river provides the opportunity to sight cast to fish in clear pools or more aggressive trout lurking in the swift current.

As you make your way close to the mouth of the river, newly migrating fish will often aggressively attack your fly and run toward the lake, requiring a quick decision to either tighten your drag or take chase downstream. In a single day on the river, two of our anglers landed more than 40 big rainbows, and sufficiently whipped, made their way to the lodge for a Malbec and Advil session. 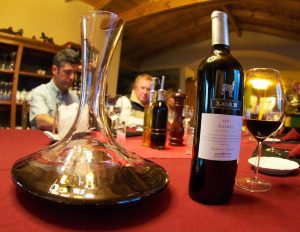 To reach ELV, you’ll take an overnight flight to Buenos Aires from any number of U.S. hubs. Once you clear customs in B.A., a Trek partner representative will be waiting to facilitate your transfer to the city’s domestic airport. The flight to El Calafate is just under three hours. Upon arrival, a member of the ELV team will meet you and accompany you for a fascinating drive to the lodge.

Guanacos (a close relative of the llama) and rheas (South America’s ostrich) are likely to be encountered as you traverse the countryside. Large male guanacos often perch on the high ground above a group of smaller animals, in search of hungry pumas. 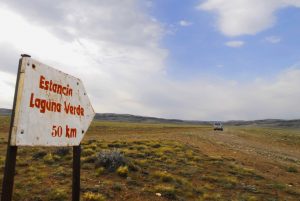 Arriving at the estancia, you will quickly realize why the place has such a sterling reputation. The guides and lodge staff are eager to connect and by the trip’s end you’ll have many new friends to ease the sweet sorrow of departure.

Bonding through a shared experience is one of the reasons Thoreau wrote “many men fish their entire lives without realizing it’s not fish they’re after.” But if you’re after really big rainbows, you absolutely have to visit Estancia Laguna Verde.

For more information or to book this adventure, email [email protected].