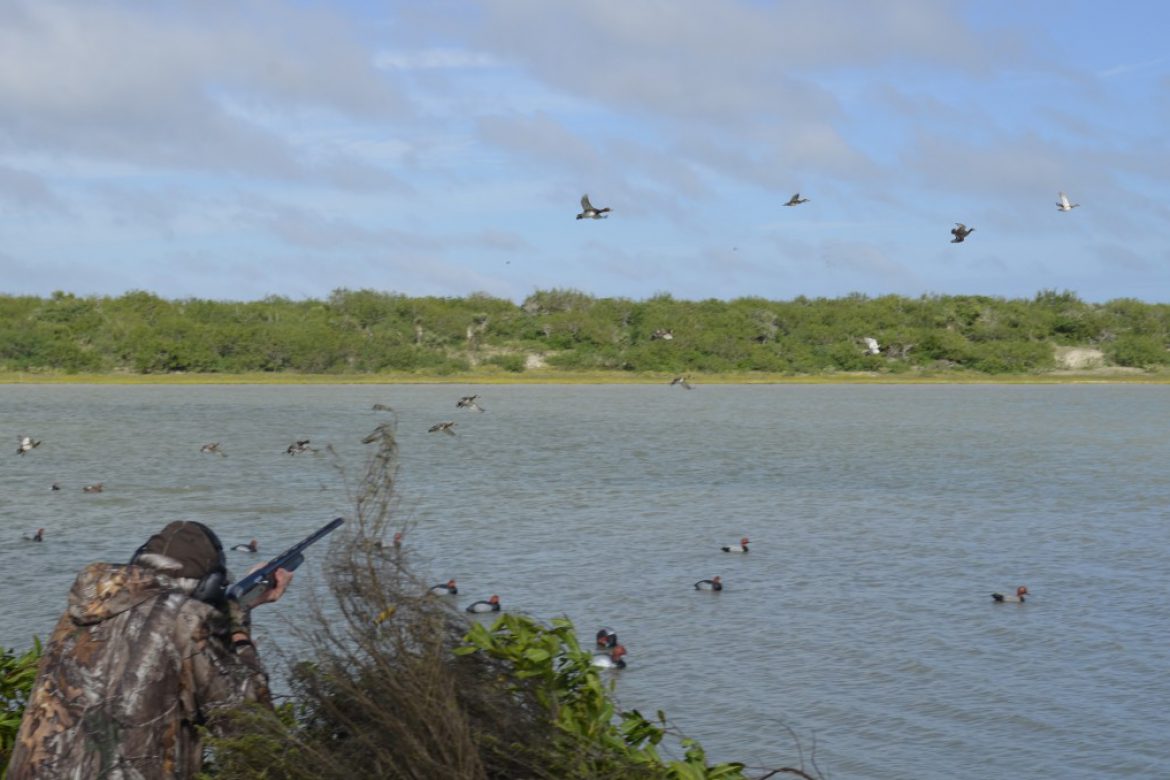 While we all travel a good bit in the Trek office, there are certain trips we anticipate more than others. For me, one such trip took place a few weeks ago as I was heading down to San Fernando, Mexico to host two Trek groups during the week of November 15-22 at La Finca Lodge. I’d pumped everyone up as we would be shooting decoying Red Head ducks on the Laguna Madre and flushing wild quail hoping to knock down at least a few of these challenging birds. Excitement continued to build before the trip as outfitter Steve McCain, Jr. called me just a couple of days before our groups arrived. He described thousands of Red Heads rafting up on the Laguna Madre, plenty of Pintail and America Wigeon feeding in freshwater ponds and 100% wild quail numbers extremely abundant around San Fernando. Steve was not stretching the truth!

We started the trip off with an easy transfer from Brownsville, TX Sunday afternoon arriving at La

Finca in time to enjoy homemade chips, salsa and nachos before dinner. No issues whatsoever crossing the border and zero safety concerns transferring down to San Fernando. The lodge is 12 bedrooms all with private baths and A/C surrounding a pool with bar & hot tub. The large dining room can seat more than enough hunters comfortably and to keep up with the college & NFL games, Steve has DirecTV service beamed in from the US. Two different lounge areas, pool table and poker table keep others occupied who don’t care to watch their team get beat. Meals are very good with the cooks having their own recipes for the game you shoot throughout the week. One in particular is a grilled bacon wrapped duck stuffed with jalapeno and soaked in some type of marinade that is absolutely amazing. My bilingual buddy Raul is in charge of the heavily stocked bar and his libations go a long way to attract hunters and to assure that the world’s problems are solved each evening.

My first taste of hunting the Laguna Madre in Mexico was sharing a blind with Steve on a morning and afternoon duck hunt some months ago. We learned a good bit about each other and one thing is evident, Steve’s passion to put people on the best duck hunt in the world is only secondary to his desire to succeed in this business. I’m not going to get into specific number from our hunt, but trust me, there are plenty of ducks! For the duck hunts, Steve has enlisted a small, local restaurant near the boat dock in the quaint fishing village of Carbonera where lunch is prepared for hunters on days groups are staying at the Laguna all day. It is some of the freshest and tastiest sea trout and shrimp I have ever eaten with homemade chips & salsa rounding out the meal. I found this a way to soak in the culture and much easier than making the 1-hour drive back to La Finca and back again for an afternoon hunt. You’ll have time to take a siesta before heading out in the afternoon. As long as the weather & wind cooperate for an all day duck hunt, groups can expect to have this same experience.
My group was shuttled from the boat dock to blinds using a brand new 20’ American Airboat pushed by a 550hp motor and two 20’ tunnel hull boats powered with 115hp Yamaha 4-strokes. Head duck guide Juan might as well have his pilot’s license the way he controls and drives the airboat. I have to say, it is always a neat part of the job gliding along in an airboat while the man upstairs paints his morning picture of the horizon. Steve employs skilled guides who are constantly scanning the skies, calling ducks and lamenting “Pato” when ducks are spotted. Sights of 75-100 ducks decoying into a spread are common on the big water and rafts of 8000-10,000 Red Heads are something just shy of incredible. We were lucky enough to have a few ducks hunts on the freshwater “ponds” right off the main banks of the Laguna. These are pretty unique as many of the large islands and peninsulas have ponds holding freshwater where other ducks like Pintails and Wigeon come to feed and rest. The amount of ducks in this part of Mexico is incredible and for it to be just “south of the border” makes it even more unbelievable.

I was born and raised in the plantation belt of South Georgia and have shot my fare share of quail, but wild quail are a thing of the past in Georgia. To shoulder the gun on a 100% wild quail flush is one of the finest hunting experiences I could have ever imagined. These birds fly fast, and when I say fast, I mean Carl Lewis on rocket-propelled roller skates fast! It seemed endless with covey after covey flushing as the bird boys walked along yelling “Whoo-Shaaa” and QUAIL!! Steve does not run dogs and I admit, I was a little curious of how the hunting would go without a pointing dog. After the first 30 minutes of quail hunting, I’m convinced he does not need dogs. The bird boys flush more qu

ail than a dog ever would and for the above average temperatures we experienced during the week, the dogs would not last more than an hour. Yes, there is something to watching a dog lock in on a point, but from the actual hunting perspective, this is not dog friendly hunting. I’ll tell everyone the same as Steve told me… “Let me know your thoughts on a dog after your first quail hunt at La Finca.” As great as the duck hunting on the Laguna Madre is, the quail hunting is every bit as good if not better!

Throughout the week we continued to have successful hunts for both duck and quail. As Thursday approached, I bid my new buddies from the first group farewell and welcomed the next group of guys. The weather was warmer and winds calm, but to Steve’s credit he customized the hunt so that we hunted quail first which allowed for the weather to get cooler and the wind to blow. Which it did and the ducks were again on display. The last morning hunt ended with one of the best duck shoots of the week and it finally felt like “ducky” weather… Low 50’s with a steady 20mph North wind. Wouldn’t you know, the last day the weather got right!

While we were enjoying one last lunch before heading to Brownsville that Sunday, I asked the guys their feelings not only on the hunting, but the safety and area based on what they experienced that week. All of them were taken back by how safe and relaxed they felt and all of us agreed we did not feel uncomfortable one second on the trip. San Fernando is flourishing again with shops open, kids playing, people walking the streets and overall a strong sense of safety. Federal military police and Mexican Marines patrol the area with the authority the area lacked several years ago. If you’d like to chat with any of the guys I hosted during this week at La Finca, please email or call me and I’ll send the reference list over. Everyone mentioned they would be happy to describe their feelings and thoughts on the program along with plans to rebook for 2016-17. We are very excited the week was a success and are looking forward to promoting space throughout the rest of the 2015-16 and into the 2016-17 seasons. Steve also runs his white-wing dove season August, September and October, which is a challenging and fun shoot. Based on all of this, we are very excited for the future in San Fernando and just how great of a hunting area it is right out our backdoor!