“Bebê!” the guide exclaims in Portuguese, excitedly pointing to the water a few meters ahead of the boat. A succession of small bubbles rise up through the root beer-tinted water, each one delicately popping as it reaches the surface.

On Brazil’s Rio Negro, this effervescence is an indication of baby peacock bass schooled up beneath the surface, which in turn is an indicator of a mama peacock lurking nearby, ready to blow up any potential threat to its progeny. One of the most awe-inducing moments of your angling life awaits, but it’s up to you, the angler, to present the threat that elicits the blow-up and to maintain your composure long enough to land the fish of your dreams. 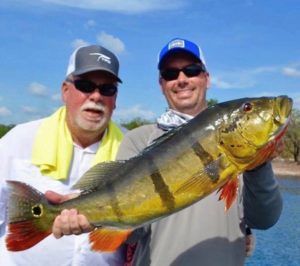 What is required of you isn’t a deft touch, but rather a steely resolve to counter-punch a fish well equipped to yank the rod clean out of your hands. Yes, you will hold leverage on the fish due to having set a hook in its mouth; but know this, the fish would defeat you without it.

Larry Larsen, president of the Peacock Bass Association and holder of seven peacock bass world line records, calls them freshwater bullies. This is not hyperbole, so hold on tight to your rod— peacock bass fishing on the Rio Negro is one heck of a ride.

If trout angling is a night at the symphony, peacock bass fishing is a front-row seat to a rock concert—only you are the one wielding the heavy metal. And by heavy metal, we refer to hooks nearly chain-link thick, because a mature peacock bass will straighten the trebles of a mortal bass lure like a thin paper clip.

This is why Trek continues to organize angling adventures to Brazil, and the reason the company was a pioneer in bringing U.S. anglers to fish for peacocks in the Amazon for nearly three decades. In the early 1980s, Trek founder Bob Cloaninger first identified Brazil as the hot spot for peacock bass after making a decision to find a replacement for the company’s Colombia fishing operations, as travel conditions in the country deteriorated due to the growing influence of the cocaine trade. 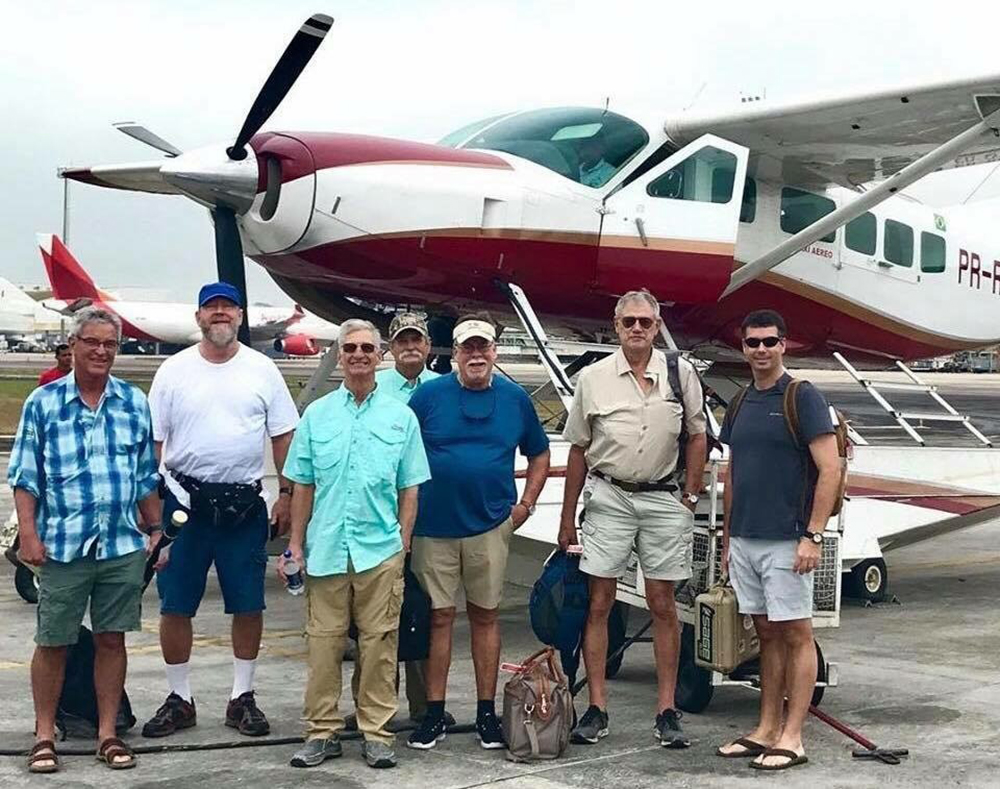 “With Pablo Escobar running loose down there, it’s not safe right now for Americans to fish in Colombia,” Cloaninger wrote in a letter to clients. “The areas we have found in the upper regions of the Amazon basin in Northwest Brazil are near virgin, as few anglers have ever cast into these remote jungle waters.”

By the mid-1990s, a surge of interest in the gamefish the Brazilians call tucunarè was fueled, in part, by the rise of the Internet, which delivered visual evidence of a colorful Amazonian “largemouth bass on steroids” that was previously regarded only in mythical terms by U.S. anglers. The Olympus of this mythology is the Amazon River’s Rio Negro tributary, which is itself considered the largest blackwater river in the world (accounting for about 14 percent of the water in the Amazon basin) and one of the world’s 10 largest rivers by discharge.

In 1995, over two decades before joining the Trek team, I made my first journey to Brazil to chase peacocks with my father. We were introduced to Trek by our friend Stan, who had been traveling with them for many years on wingshooting excursions. Stan raved about Trek’s relationships and meticulous planning to deliver epic international adventures for traveling sportsmen.

I remember many amazing things from that first trip to Brazil, but my fondest remembrances are of our Brazilian guide, whom we knew by his nickname, Frenchy. I have no clue why he was called this, as Frenchy was about as fluent in French as he was in English, which is to say we communicated in the universal language of fishing, which is comprised of few words, but a vast array of passionate hand gestures.

Despite the language barrier, we quickly bonded with Frenchy, who at the time was in his mid-20s, like me, but at a diametrically opposite place in life. Frenchy was married with a baby at home, grinding out his days to help other people indulge their passion so he could provide for his young family. I had no such attachments and no real clue about the pressures facing Frenchy.

As the river was running low, we convinced Frenchy to make a hike through the rainforest to a remote lagoon he had told us about, one that offered the potential of ravenous, captive fish. This was no easy endeavor, as Dad and I were responsible to take turns dragging the boat over thick underbrush, while Frenchy macheted a path through the rainforest.

For both me and my Dad, this trek through the rainforest remains one of our best memories– one of those rare moments when you work hard for something you love with someone you love and achieve the reward of a shared experience that will last a lifetime. We each landed 10 fish a piece in that spot, including a few over 15 pounds.

Both my Dad and I were able to boat peacocks of more than 20 pounds during the trip, each while casting across the bubbles. While Kevin Gehm, Trek’s vice president of fishing operations, says tongue-in-cheek that he landed the only 19.5-pound peacock ever reported out of the Rio Negro, the river has undisputedly produced more peacock bass weighing in over 20 pounds than any other river. The world record speckled peacock bass (the largest of the six species of genus cichla), which tipped the scales at a whopping 28 pounds, was hauled out of the Rio Negro by a U.S. angler in 2010. Fish north of 30 pounds have been reported for decades, but not certified.

Predictably, pressure on the Rio Negro fishery grew immensely since the mid-1990s boom, in direct proportion to the reports of monster peacocks emanating from the rainforest. As anglers migrated en masse to Brazil, the fish caught on. Lure-shy peacocks forced longer and longer boat rides to reach less pressured fishing grounds. This is not an experience that Trek will offer its clients.

Untold thousands of ventricles push out from the main artery of the Rio Negro, spreading throughout the Brazilian rainforest. While the Rio Negro represents one of the earth’s most massive expanses of habitat—indeed, there is an immense untapped potential for peacock bass fishing within this river system — it is more cost effective for outfitters to serve clients utilizing existing assets than to explore developing new ones.

Over the past two and a half decades, Trek has made a number of expeditions into Brazil to locate the latest and greatest options for our clients seeking big peacock bass action and Amazonian adventure. Most recently, we have found what we believe to be the absolute best and most unique way to target trophy peacock bass anywhere: remote fly-in floating cabins.

The floating cabin configuration provides unmatched portability that allows us to continue to explore new waters and deliver clients deep into the hot spots. This experience is a safari on the water; you are literally in the bush, in close proximity to wildlife you will only see in the rainforests of Brazil, but with creature comforts like queen-sized beds and air conditioning.

Take pause to consider this feat of modern ingenuity. You have been flown deep into the Brazilian rainforest via floatplane, to fish sections of the Amazon River system where relative few anglers have trod. Yet, each night you sleep in the cool comfort of a traditional lodge.

You can expect to see caiman, pink porpoises and monkeys during your days fishing the Rio Negro, but there really is no telling what else you may encounter during your visit. The fishing is fast and furious, and often these wildlife encounters provide a much-needed respite for muscles fatigued from casting, ripping monster-sized plugs through the water and fighting fish.

When you fly into camp, you will arrive needing only your clothes, sunscreen and rain gear. All fishing tackle is provided as this is truly a “show up and fish” experience.

For the truly adventurous angler, if the water levels are low, you may encounter an opportunity to do a lagoon hike. A word to the wise is necessary here: only ask your guide to take a hike if you intend to pull your share of the weight, lest you are keen on achieving persona non grata status back at camp.

In writing this field journal entry, it occurred to me that in my remembrances of that first trip to fish the Rio Negro, I still think of Frenchy as a 25-year-old young man, leaping out the boat to chase down a line that had broken off when an especially ill-tempered peacock wrapped around a submerged tree branch. After swimming to the branch, Frenchy came up for air, dove back under and quickly re-emerged, fish in hand, with the proudest expression on his face.

“Big feeesh,” he shouted, pulling his arms apart as if preparing for a bear hug. At this moment, I knew he loved the pursuit of what’s below the water as much as we did.

After our last day of fishing, Frenchy brought us to his village to meet his wife and newborn baby. They lived in a raised, open-air hut that had been built by Frenchy.

Theirs was a simple life, but in no perceptible way an easy one. Nevertheless, their smiles were genuine and unending and their hospitality was immeasurable.

Frenchy would now be, like me, approaching the age of 50. The baby I held would be in her late 20s, no doubt having benefitted greatly from the economic impact of traveling anglers.

But there is no question we benefit more. For without people like Frenchy and places like the Amazon, how would we quench the soul’s abiding thirst for adventure and connection with the natural world that is too often missing in the busyness of our daily lives.

Take a look at the details of a trip like this for you!