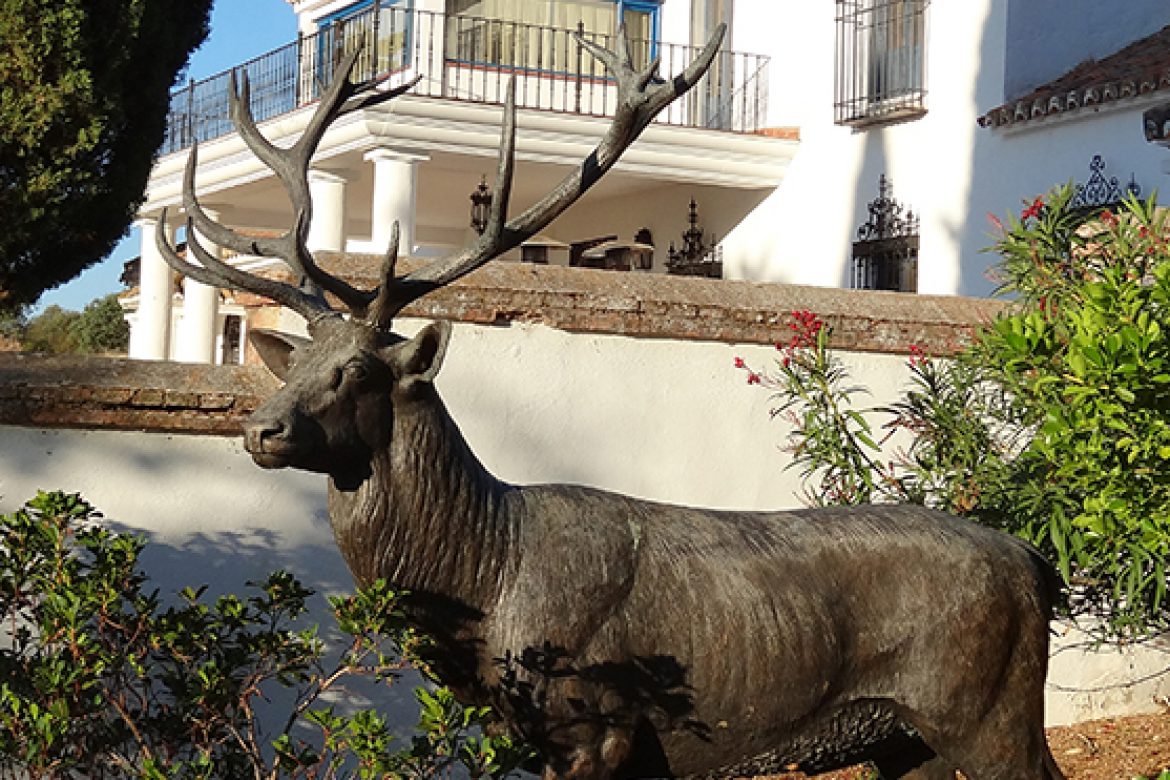 Here I was, hosting another couples group in some wonderful far away country. This time it was Spain in early November 2015 and I was flying solo as my wife stayed behind anticipating our first granddaughter. Fortunately the group 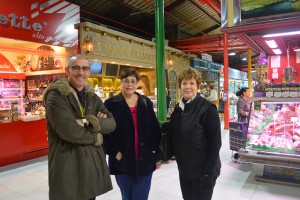 dynamics were made up of loyal friends and clients who have been traveling with us for many, many years.

Oklahoman Tom Slamans was the undeniable group leader, although he would admit that when it came to difficult decision involving the ladies, he would smartly give a nod to his lovely wife Jan. The Slaman’s brought their great friends the Shaw’s, Jacque’s, Gungoll’s, and Nokes and solo mate Larry Hays. Frequent Trek travelers Mack and Jean Jenkins from Alabama also joined us and was their second trip to Spain; they were quickly welcomed into the crowd. 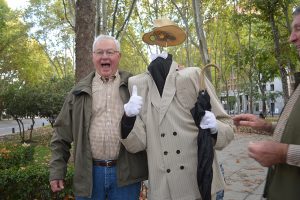 Our first two nights were spent at the beautiful Ritz Madrid located in the heart of the “Golden Triangle of Art” featuring the incredible Prado Museum. I have stayed in several different hotels throughout Madrid but the Ritz is tops for its location and attention to details. Plus in case you are walking around, you can see that golden dome for miles away. Among the highlights during our stay in Madrid was our visit to the Plaza Mayor, Barrio de Salamanca and the Mercado de la Paz where we found our more than we ever knew about how they grade their delicious prosciutto ham. I must give some props to our guide Pablo Navarro who was polite, articulate and kept us moving and entertained the entire two days we were there. He’s a big soccer fan as well and showed his passion for his team Real Madrid and the beautiful Santiago Bernabéu Stadium.

Our meals were excellent and perhaps the highlight was our luncheon at Esteban’s  where we ate most everything on the menu and finished it off with their customary bottle(s) of Grappa. The boys had way too much fun with that liqueur. I left Madrid thinking how much more happy it was than my last visit there in 2012 when their economy was stressed and unemployment super high. I think everyone really enjoyed Madrid and I look forward to visiting again very soon.

After our time in the big city, we were gathered in a caravan of Land Rovers for the two-hour transfer south to Estancia Pinos Altos just south of Ciudad Real. It’s a beautiful drive passing endless acres of olive groves, vineyards and cultural 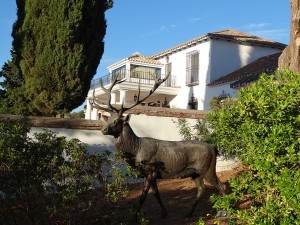 buildings that outdate our nation by hundreds of years. This area is known as Castilla La Mancha, most famous for its windmills and the novel Don Quixote. It’s a sparely populated region that is barren and rocky and the wind meets few obstacles. The people live simple lives here and know each other by family names from centuries ago. One of those is Fernando Saiz and his wife Koki who live and operate Pinos Altos that was first created 300 years ago and still hosting hunter and their companions today

It did not take long for our Southern group to cozy up to Nano and Kiki and our new digs, which is one of the many reasons I enjoy our relationship with Pinos Altos, there are no expectations as to how to dress or act and you are made to feel at home. Except of course that you are waited on hand and foot and get to experience a tradition that can only be described as regal. After introductions all around and a beautiful welcome dinner we were ready for the next three days activities.

The men of course came to challenge their wingshooting skills with the elusive Red-Legged Partridge and challenged they were. While Jenkins and I had hunted 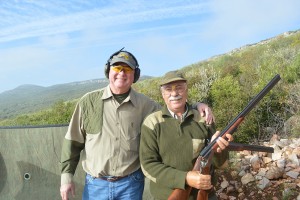 the driven partridge before, the rest of the group were rookies and despite my telling them to shoot out in front and do not worry about shooting them going away, they wanted to make sure that any partridge they aimed at was not getting away. Well after shooting up a few olive trees and not cutting a feather, these guys quickly adjusted and the harvest numbers quickly grew to an impressive bag. These guys can really shoot and once they saw how hearty and fast these birds flew I think they all had a greater appreciation for the hunt. Head guide and line orchestrator Beltran Cotoner continued to offer his advice and expertise and by the end of the three-day hunt our group embellished each and every drive of partridge. Aside from the excellent shooting and great overall organization of the beaters and flag bearers, the snacks and lunches in the fields were amazing. We just had to be careful to moderate the wine flow.

The ladies were treated to shopping and cultural stops to nearby Toledo that included a tour of the famous Cathedral of St. Mary that is one of the most gothic structures of all of Europe. Beatriz Heredia hosted the ladies and found some wonderful leather goods and other fine European gems. They also joined the men in the fields to see how exciting these driven hunts can be and indulged the same great meals. I actually think some of the ladies thought so much of the hunting action that they were just as thrilled as the men when a partridge was downed.

After our four nights at Pinos Altos we bid farewell to the Saiz Family, and our band of Spanish conquerors headed to Ciudad Real for a fast Ave train to Barcelona. This was quite the adventure considering we had only about only about five minutes to get everyone on board as well as the ton of luggage we had brought. While we waited for our train on the platform we were able to see up close just how fast these trains are as one came by without stopping at our station. Holy Bejesus!! I had no idea these things were that fast until we got on board and saw the reading of 360 kph!! We covered the 700 miles in 3 hours and 40 minutes in relative comfort with reclining leather seats and decent grub for a train. The countryside was a mix of valleys and mountain ranges along our route in the center of Spain.

We were met by our guide Carles Roig and continued on a short tour of the famous architect Antoni Gaudi’s most famous projects. We drove up to Modernist Park on Camel Hill affording the most magnificent view of Barcelona and then 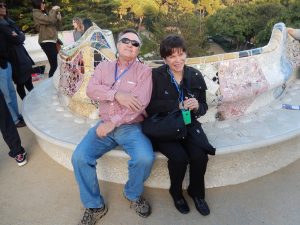 down to the eclectic Guell Park, Paseo de Gracia and Gaudi Houses such as Casa Milá and Casa Batlló. Carlos was excellent in all things Gaudi and passionate about his teachings to our group of mostly oil/gas and timber executives and their more refined spouses. All of these sights were just amazing in color and design and while I am no architect, I certainly can see the influence Gaudi had in Barcelona.

We finished our trip with a wonderful tour of the sacred Gaudi masterpiece, Sagrado Familia Church. This is truly an incredible experience and you must have Carles as a guide to fully understand its genius. Even so, I admit it was way by me most of the time. We finished our last day touring the Rafouls Winery in the Penedas wine region and feasting on the many different tapas that make Spain what it is. That evening we toasted the town on our rooftop bar from the Hotel Bagués and had a seafood feast at La Gavina overlooking the Port Vell Marina, a beautiful spot a nice way to end the trip. I 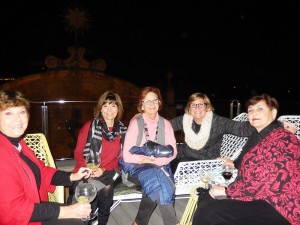 must say how thoroughly impressed I was with Barcelona, just a super exciting city that is certainly proud of its heritage and multicultural assets. People of all ages were walking the streets of La Rambla until way past midnight, and why not, there are bars, restaurants and open-air activities on every street. In my mind, Barcelona today is a top five city in the world and we will be back.

I cannot say enough about the excellent service provided by our providers Made for Spain Travel in Madrid and Estancia Pinos Altos in Castilla La Mancha. In general, the service at all locations was superb and extremely friendly and it is part of why Spain is so much fun to visit. Look for more details soon for another Couple’s promotion to Spain in 2016.