Being a recent empty nester has made travel very appealing, so I was thrilled when Larry asked if he and I could host this year’s couple’s trip to Argentina and it was an immediate “Of course”, from Milton and Cara. I work mostly behind the scenes now, but some long time Trek customers will remember me as Kathy Price, their travel agent. Going way back some of you might also remember when we learned how to use email together. Fast forwarding to today and experiencing all of the different social medias that are now available illustrates how everything changes. Our world is constantly evolving and the same can be said of Trek Safaris and our trips.   Some of our most popular destinations have transformed from good hunting trips with comfortable lodging to phenomenal hunts with spectacular lodges. The Argentina couple’s trip centers around one such lodge, Guayascate.

Along with perfect weather, this year’s couple’s trip began with one vital element of a well-remembered journey – a great group. Ron and Ruthellen, Tom and Celeste, and Anna & Chris were friendly, easygoing, and fun loving. I never really felt like Larry and I were hosting the trip (well, Larry was really taking care of the details). I felt more like we were lucky enough to have been included on a great family vacation. One other couple, Dennis and Betty had to cancel a few days prior to the departure and were sorely missed. 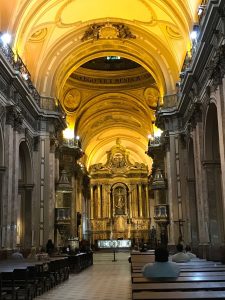 Overnight flights are the norm for Argentina trips, so we checked, bleary-eyed, into the elegant Alvear Palace early the morning on April 27th for two days of touring Buenos Aires and the sampling of some excellent restaurants and their wines. Gloria with Gateway’s Travel was always at our side showing points of interest, helping with menu choices, and assisting with our search for a certain hat. A member of our group was trying to replace a well-loved and well-worn hat from an earlier trip and we were all actively looking for it. Jackets, purses, and belts were purchased but no hat.   A trip to the colorful and unique Recoleta District yielded several paintings but not a hat to be seen. We never did find that darn hat. Favorites of our time in Buenos Aires were our first night’s dinner at Sotto Voce Libertador, where Gloria and Silvina from Gateway’s Travel joined us, the Recoleta Cemetery where Eva Peron was buried (her last resting place but only one among her odyssey of burials), the Recoleta Art District, and our last night where we had a lavish meal at Rojo Tango and then watched their exquisite Tango Show.

On the third day, we were on our flight to Cordoba Province where we were picked up by Mariano and transferred 90 minutes to the lodge. I had been to two other H & H lodges, La Portenita and Sierra Verde (both of which are beautiful in their own right), a few years back and recognized some of the land 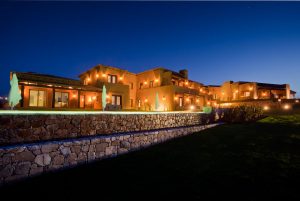 marks.   When we turned into the long entrance to Guayascate, I think we were all a little amazed at its sheer size and presence as we caught glimpses of it while driving up the winding road. Walking toward the front door gave an immediate feeling of welcome as we were greeted by the staff with glasses of champagne and dove appetizers…delicious! Entering through the front door was soothing to the senses. Luxurious but not overwhelming, tastefully decorated and appealing to the eye, it was a delight to spend time there. The staff quickly made us comfortable and we had the rest of the day to rest and enjoy the lodge with a fabulous dinner later that evening. 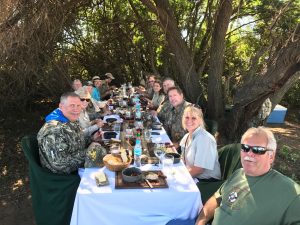 Now this part of the trip is geared toward hunting, with the hunters heading out each morning and non-hunters doing as much or as little as they like. This group of ladies liked to stay busy, so busy we were. The first day we got acquainted with the lodge, hiked around the property, set up massages for those that wanted one, and enjoyed relaxing by the pool. Matias, the lodge manager, Alejandro the multi-talented bartender, and the rest of the staff took good care of us on that first day.   I should mention that our group hadn’t filled the lodge, so at this point 3 brothers from the states and 4 gentlemen from Ecuador joined us. Alex and Zeke did a great job pairing our groups up and we all thoroughly enjoyed the larger group interaction at dinner and the stories told for the next three nights.

The next day we joined the hunters in the field to watch a little of the morning shoot while guides Francisco, Herman and others prepared an Asado lunch in the field. Great hunting for the guys, an awesome sunny blue day, and a barbecue served on a white tablecloth with wine glasses…what else could you ask for? It was perfect. After lunch, the men moved to the roost for the afternoon hunt. Meanwhile the ladies went for a horseback ride and then we rushed back to the lodge to get cleaned up….Danny, the chef had promised us a cooking lesson. So washed up and armed with more champagne, we took a turn in the kitchen with the ever patient Danny, as we learned how to make the filling for empanadas and chimichurri, green chimichurri, and criolla sauces. Evidently we were good students as we received an invitation back to help put the empanadas together the following day. That evening the table had leaves added it to it for a second time as Alex Hayes and his lovely wife Valerie joined us for dinner. They’re wonderful people and it was great to see them again. 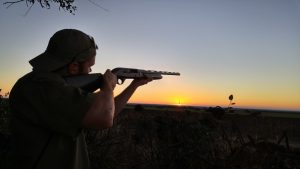 On our last full day, the men were up early again for the morning shoot. The ladies were able to sleep in and have a leisurely breakfast, after which, three of us decided to walk from the lodge to the front gate. For anyone who has ever wondered, it clocks in at a respectable 2.6 miles round-trip and we felt better after working some of those meals off.   Really though we were eagerly anticipating our afternoon outing. There were two weeks left in the polo season and Alex had arranged for us to watch a practice polo match at a former president’s mansion, Estancia La az. There’s also an 18-hole golf course there and two of our hunters elected to spend their afternoon playing golf instead of hunting. Mariano and Larry drove us over in the van, where we dropped the guys off for golf 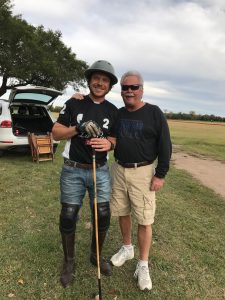 first and then we headed over to the match to meet Alex. There were a remarkable amount of horses and men there when we arrived and I need to thank Alex again for going through all of the time and effort in putting this together when I expressed an interest in watching a match.   On top of that, only in Argentina would you have the lodge owner (Alex) and the head hunting-guide (Mariano) also turn out to be experienced polo players. Alex had twisted his back a few days earlier but Mariano was soon suited up and out there whacking the ball with enthusiasm. What a fun day!  Afterwards we picked up the guys, who had a spectacular round and headed back to the lodge. That evening was just as enjoyable as the day had been. After another fabulous dinner, Charlie and Willie (talented and at times hilarious local singers) came and entertained until late into the evening. 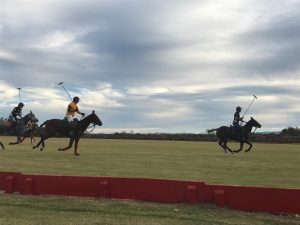 We had felt socomfortable and at home at Guayascate, that it was more than a little hard to leave the next day. The lodge is just that nice and you’re so well taken care of that you know you won’t have an experience like it again any time soon. Luckily we had some free time in the morning to appreciate the lodge and staff one more time before loading up for our trip back to the airport and our flight to Mendoza.

We arrived into Mendoza late that afternoon, where we were met by our Uncorking Argentina representative, Damien, and transferred to the Park Hyatt. The Hyatt is centrally located and all dinners had been set up within walking distance. Dinner that night was the Azafran Restaurante, with great service, appetizers, dinner, dessert, and of course, wine. You could never say that we were underfed on this trip!

Our first full day in Mendoza featured tours of three very different wineries in the Lujan de Cuyo area. We quickly left the city and soon found the Aconcagua Mountains growing in the distance. Our first stop was the Cantena Zapata Winery, with a beautiful view of the snow-covered mountains in the background. We had an excellent guide who gave us an in-depth history lesson in wine, a tour of their very impressive modern facility, and then followed through with wine tasting. The next stop was the Benegas Winery, an older facility loaded with charm. Our wine tasting here was held in a large barrel shaped room that used to hold enormous amounts of wine. During the tasting we were honored to taste a limited vintage bottle from the owner’s private stock. Our last tour included lunch and was at the Lagarde Winery.  Our 5-course meal was paired with special wines of the region and each course really was a culinary experience to be remembered. The tour of the winemaking facilities took place after lunch and again, had a totally different feel than the other two wineries. We returned back to our hotel to rest up before dinner that evening at the Cordillera Vinos y Fuegos Restaurante, where Eric with Uncorking Argentina met us. Eric is originally from Pittsburgh and livened up the evening with his insight on Argentine customs and values over dinner. 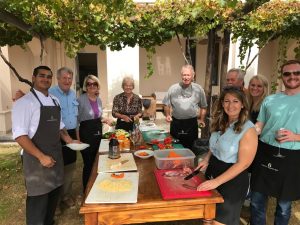 Our last full day in Mendoza was reserved for a private cooking class and wine tasting at Finca Agostino Winery. This winery has beautiful landscaping, enhanced by fields of grapevines with gorgeous views of the mountains in the background, (perfect for photos). After picking vegetables and herbs from the organic garden, we were set up at our stations (complete with endless refills of wine). Our chef, Diego walked us step by step through the preparation of our meal and it was heartily enjoyed by all. Our meal was served in their beautifully appointed restaurant and was a complete success with the exception of our group’s (made by our own hands) bread. Sorry to say, it was hard and heavy as a rock. We had time afterwards to go back to the hotel and rest or shop and then it was off to dinner again. Tonight was the Ochos Cepas Restaurant and it had a great and varied menu, so many of us chose something other than steak that night with a beer thrown in here and there, instead of wine. We also had a birthday girl in our midst, Ruthellen had a birthday coming the following day when we would be headed home, so Ron had ordered her a cake for that night. The restaurant outdid themselves with a layered creation of mouthwatering bliss and a candle (really it looked like a three foot tall sparkler) that would have been banned in the states. All in all, a perfect ending for our last evening in Argentina.

Wishing all of you the best in your travels!