Baronscourt Estate, situated in the beautiful countryside of County Tyrone, is home to the Duke of Abercorn, who along with son Lord Jamie Hamilton, serve as wonderful hosts to a handful of groups during the fall hunting season. This magnificent Georgian home was constructed in the mid-1600’s and adorned with original paintings of royalty from the 14th century onwards. Recently it has been renovated with new furnishings and artifacts depicting the style for which it was originated, albeit with modern appliances and technology. This is truly a family home with eight bedrooms, extensive library, game rooms, living room, informal and formal dining areas and various other beautiful common area spaces.

Trek has exclusively reserved the date of October 3-7, 2022 the famous Baronscourt Estate in Northern Ireland for a line of eight guns to hunt Ringed-Neck Pheasant, and Mallard Ducks. This is a very rare opportunity and one we are pleased to offer our clients. The Estate consists of 5000 acres featuring some 20 different drives for Ringed-neck pheasant and mallard ducks. Each drive is distinct from one another and affords guns with very challenging opportunities. Usually we shoot 3-4 drives per day with a break for snack. Baronscourt meticulously hatches and raises their own pheasants and Mallards making sure only the more vigilant fliers are introduced to the ancient woods surrounding the property. Some hunting stands are located near three lakes in the Baronscourt Valley, making truly a dramatic and unique backdrop for driven hunts. Our line of shooters will have two days of 300 pheasant/duck hunts and one full day of pheasant only at Baronscourt.

For our Non-hunting guests we have planned some unique activities while at Baronscourt, Trek has arranged a package including a walking and historic tour of Baronscourt Estate by Dr. William Roulston who has written a book about the Hamilton Family, a visit to the Maggie Tweed Factory and a tour of its history by a family member and lastly a day visiting the nothern coast including tours to the Giant’s Causeway, The Distillery at Bushmills, Dunluce Castle and Carrick A Rede Rope Bridge among other interests.

Reaching Baronscourt is easy with daily flights into Dublin and Belfast followed by a private 2-hour transfer. We must stress again that this is an extremely rare opportunity to not only hunt this wonderful Estate, but to also be hosted by the Duke and Lord Jamie who make their home yours for the hunting season. If you are interested in seeing more of this beautiful island and touring through the Republic of Ireland please contact Trek for more information on the 6-night optional extension trip. 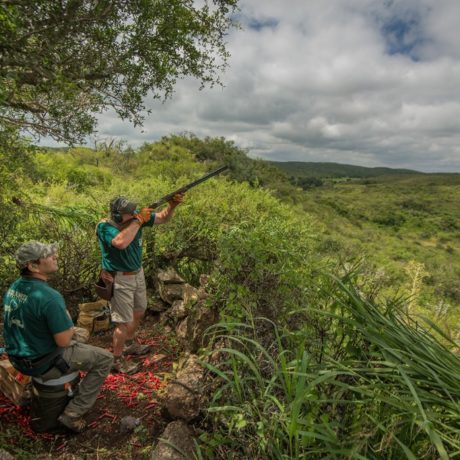